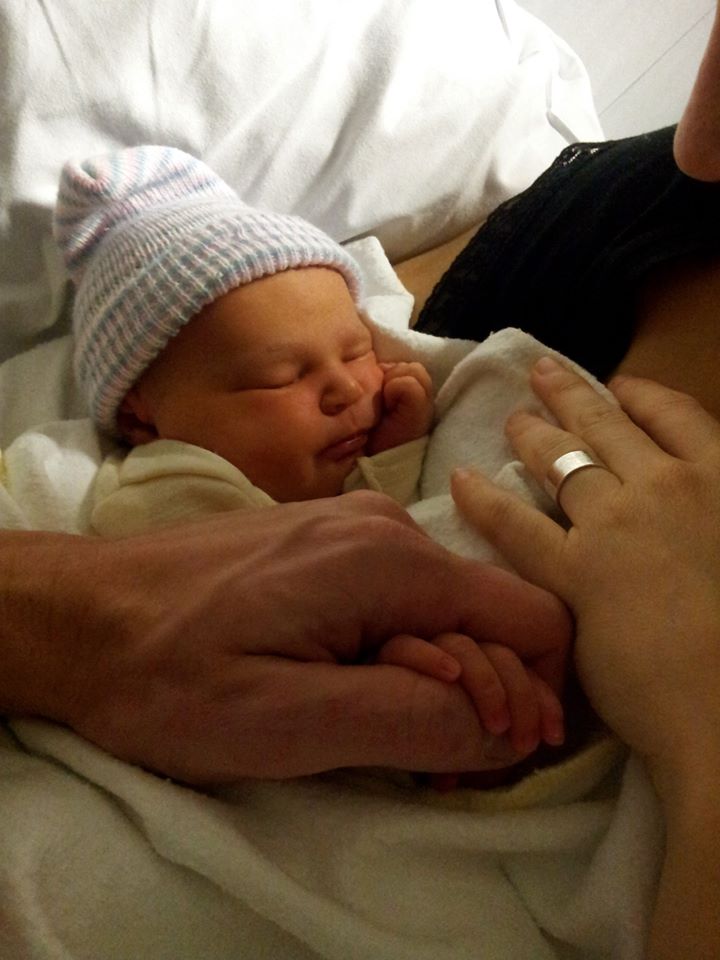 A large scale study made by the HypnoBirthing Institute spread over 5 years has revealed that HypnoBirthing mothers use far fewer interventions, if any, during their birth than other mothers not utilising its mindset and practicality. Evidence-based outcomes show significant decrease and even elimination in use of oxytocin, analgesia and pain killers. Among the many benefits, it is proven that the first and second phases of birth are shorter, babies are born with higher than average APGAR score, and that mother & baby are happier and content. 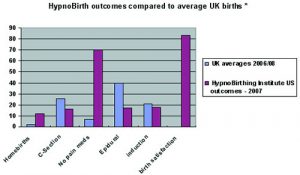 This amazing mother I had the pleasure to share the course with, she received a diagnose of having Pre-eclampsia on her last (!) day of being pregnant. With her birth turning into a medical one, a scenario she hadn’t planned and hoped for, but did prepare for it as well, she experienced a natural, physiological, with almost minimum interventions birth!

I find her birth story truly inspiring, and even more when it unfolded differently than planned. This is where her greatness came into the spotlight even more. With her commitment and devotion for her baby, herself and her man, it makes total sense she was this pillar of calmness and strength all the way through. You own it lady, for life!

This is her amazing story. I bow to you!  and thank you for giving the permission to share your beautiful experience, as it for sure will inspire others.

My water released at 15.00, on 31/12. I had no surges, but decided to call midwife as it was the last day of the year, so I thought I will better notify them.

The midwife came at 16:30 to check on me – my blood pressure was too high. So we thought that maybe I’m just too excited, but she had to refer me to hospital to do the cheek up…

Before 18 we arrived in hospital, I had blood & urine test, and the baby was monitored. Pre-eclampsia was confirmed (unlucky on the last day of pregnancy), so we became ‘medical’, and my water birth became off the table. But I did not feel any symptoms of pre-eclampsia and the baby was fine. Also induction was put on the table if nothing happens till the morning naturally, and me and baby would be still in shape. As you can imagine not the best start, but we stayed calm, told it is what it is and let’s see what happens during the night. The most important was that we will all come out healthy out of it.

We were moved to the room, got the dinner. During my desert around 8pm I started to feel some strange pressure in my hip ligaments. And then it became more frequent, but not painful and different than I expected. I expected much stronger. We let them know, asked for the ball. I had to be monitored, and me moving a lot was causing crazy readings, so decided to be more chilled on the ball. I was still allowed to disconnect from it time to time, and my partner was in charge of it.

My man set the entire room – electric candles, deemed lights, the music (my private mix and Hypnobirthing relaxation). First I was with normal music, then moved to the rainbow relaxation and birth affirmations. He put a towel over screens, switched all the beeping (besides the alerts), etc. it was all nice and comfortable. We were left in peace as they told that we look fine and as a good team. They were passing by from time to time to check if all ok, and whenever we needed something we would push the button. My nurse was Marco, very funny, calm and friendly guy.

They could see how often I had surges so they came by for the check up at 21:45. To their and my surprise, I was still talking really calm, also still in making jokes mood and.. 7cm! When the surge came I would say one moment, breath through it and came back to the topic;) The next check up was 0:30 – 8cm, got reminded not to push. At 1:45 I have told my man that it is now, as I really cannot not to push. And ..  I was right. Our daughter  was born at 2:10.

To me it all happened really quick. I had a lot of moments that my mind was drifting somewhere, like I was there but not there in the same moment. Like being in a cloud, zone, after mushrooms or any other funny substance which makes you still present when you need and drift away when you want. I did not feel pain, just lots of pressure in my hips ligaments, and some in lower back. I spent most of the time on the yellow skippy ball, with my man behind me to lean on. It gave me a good feeling and I felt secure. Whenever the strong surge came I would lift myself a bit on his legs and he would apply some pressure on my lower back and it was making miracles. Even the pushing felt good as I really wanted to push. Maybe some extra pushes that they asked me to do were not necessary, but I really wanted her to be born, so didn’t care at that time. There was no screaming, no crying from pain, only tears of joy, no drama, no panic, no epidural or other pain killers. To my surprise, I even did not mention the option. All was relaxed, we only had Marco and doctor in the room for the actual emergence of the baby.

She was born with a big scream, put on me to enjoy the time together. Placenta was expelled, and we had a lot of time with her. I felt really good, obviously full of adrenaline;-)),  and did not need any assistance for taking a shower. As a standard procedure with pre-eclampsia we had to stay at least 24 up to 48 h in hospital. We got released on the 2/01, as my blood pressure was under control with medication.

Before ending of the shift both Marco and the doctor came to us. They thanked us (!) for being a part of this birth. Marco was super impressed how calm and relaxed we were, how we set everything and went through everything together. They told it was amazing first delivery of the year and they hope all were like that. It was actually really touching. Marco also told it to other nurses and midwifes, as I had them later on coming by to ask how I prepared and so on. Really great.  Hopefully they will remember your name and recommend the Hypnobirthing to other ladies. I do really believe that it helped a lot, especially that it was not like I wanted.

The time after the birth- I’m really surprised how fast it went, I took it easy for few days, but still… Was quite mobile from straight after. And now stuff all ladies are always worried about:. Pelvic floor muscles – all feels good,j ust bit sensitive, I have no pain in my body, just some parts felt like after good workout first 2-3 days. I already went for some long walks, and all feels fine. Of curse I’m tired, but it is the new sleeping routine 😉 Breastfeeding – going smooth after 5 days,  the day with the engorgement was challenging for me and her. 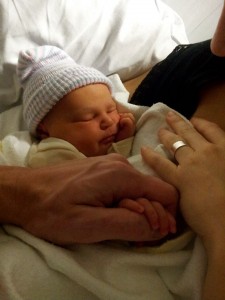 Our baby – she is doing great, already crossed the birth weight on day 6! She s a good eater and sleeper (2 feeding sessions a night), just has some cramps in the evenings and that make her cry a bit. Though she really wants to be close to us at night. But for the rest she seems funny and relaxed little lady. And she has hilarious hair!!

I wish all the ladies would prepare for the birth, it can be an amazing and empowering experience, not a drama and pain story!

Hypnobirthing works, even if birth doesn’t go according to the plan! Thank you for the course and all the yoga moves!

Inbal Sigler is the founder of Isis HypnoBirthing & Yoga. She is also a certified HypnoBirthing trainer, Yoga teacher specialized in pre- and postnatal, and a doula. Isis Hypnobirthing & Yoga is a comprehensive pregnancy and childbirth preparation course combining techniques of Hypnobirthing, Theta Healing, Chinese Medicine and Yoga. Inbal supports women on the amazing journey to motherhood in fertility, pregnancy support and birth support.

My personal journey of birth and life
March 1, 2017
Book a class

We are in love, we can’t believe she is ours. Life is amazing and I can’t stop thanking my body to have created her. All these preparation months have this as result! Thanks to u!

Olga & Saul, Amsterdam 2018
Niklas and I would like to let you know that our son Luca was born. We had a beautiful natural birth, Hypnobirthing helped me a lot! I was very focused and was able to completely shut off, I lost count of time, thought that my labor in total was 4-5 hours when in fact it was 11h. I’m so happy we followed your course, thank you Inbal for it!
I’m very thankful for the midwife I had, she was great! Also Niklas was an amazing support massaging my back every single contraction and reminding me to breath and make groaning sounds as my labor advanced. Our boy was born in the amniotic sack which broke after his shoulders were out. It was a very special experience for all of us.
Thank you so much Inbal for setting us on the path for a beautiful birth!
Yaroslava & Niklas, Amsterdam 2018
I’m happy to let you know that my baby boy was born on February 19th.
I had the most beautiful birth in Geboortecentrum West, assisted by my amazing midwife and husband.
After your course, I listened to hypnobirthing tracks at home and also during birth.  The birth lasted only 3 hours and throughout this time I felt very confident and relaxed.
So HypnoBirthing definitely works!!! Thanks again for your support in helping women to have an amazing birth experience, far away from what we often read or hear 🙂
Madalina & Dan, Amsterdam 2018 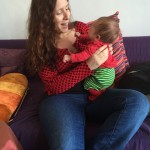 Hypnobirthing really helped me and my partner to get into the mindset of fearlessness and trust before, and during the birth of our son. My labour was relatively short and easy, and I feel this was mainly due to how relaxed I had become during Inbal’s intimate and supportive sessions with us.  Thank you dear Inbal for being you.

Liza Hyde, Amsterdam 2015
Besides the physical strength I’ve got from her yoga classes, Inbal is tremendously well able to prepare you as an expectant mother for a loving, relaxed and especially natural childbirth. The way that I’ve welcomed my daughter Ama into this world I recommend to every woman. 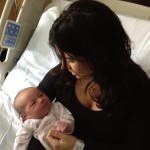 Hi! My name is Mariana. Four months ago I had my daughter Valentina and was feeling really detached from my body. Inbal helped me reconnect my body and soul! I love her classes and feel really blessed that I found her. Thank you Inbal!!!

By continuing to use the site, you agree to the use of cookies. more information